How to do a tree census: Ambalipura Lake volunteers’ experience

If Bengaluru wants to maintain its last remaining lakes and trees, citizens need to take an active interest in preserving them. If the last decade is any indication, collaborations between BBMP and citizen-led groups have led to the revival of many of its lakes. Here is how a group of dedicated activists/citizens have been maintaining their neighbourhood lake along with the trees in the surroundings.

First the lake, then the trees

Lower Ambalipura Lake is a seven-acre lake with two acres of wetland. The water body is surrounded by apartments – SJR Redwoods, SJR Park Vista, Mantri Flora and Trinity Acres, and the Iblur Military campus. Once threatened with extinction, the lake area and its surroundings went through a transformation in recent years which has now made it a favourite spot for nature lovers. 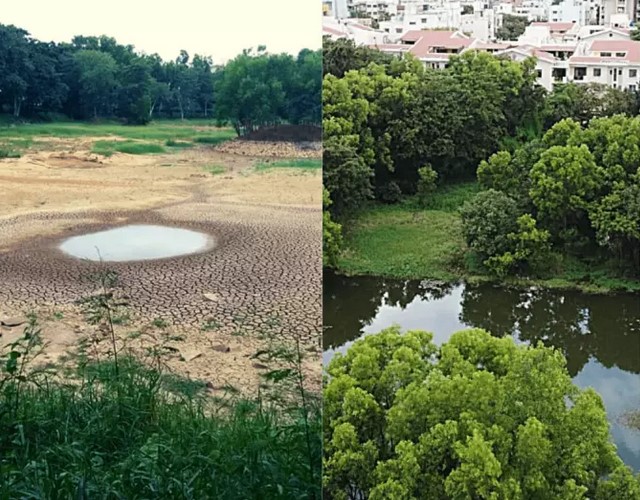 Before and after rejuvenation of the Lower Ambalipura Lake. Pic: Shubha Ramachandran and Priya Nair

In 2009, a group of active citizens residing in the neighbourhood got together and collaborated with BBMP to rejuvenate Lower Ambalipura lake. The lake was unrecognisable as there was no water, had overgrown weeds and was contaminated with sewage and filled with silt. The government, which maintained the lake from 2009-2014, had spent Rs 56 Lakhs on its rejuvenation. In 2014, Mahadevpura Parisara Samrakshane Mattu Abhivrudhi Samiti (MAPSAS), a nonprofit trust formed by residents in the neighbourhood for lake maintenance, signed an MOU with BBMP for maintaining the lake. They appointed a dedicated gardener, Seenappa, to maintain the greenery around the lake. MAPSAS maintained it till 2019. In 2020, the lake was handed over to active volunteers. 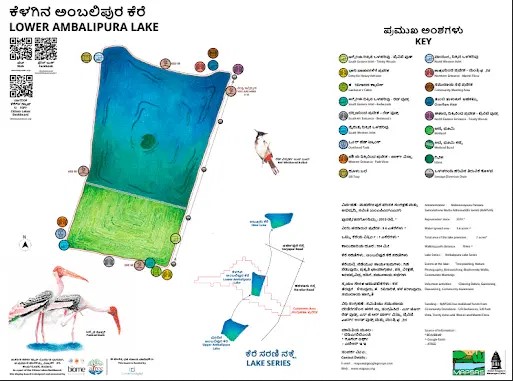 Unique identification numbers for the trees

Despite growing urbanisation, the lake was fortunate to have over 1200 trees of 75 varieties thanks to the annual tree plantation drive conducted by the residents. Yet, the lake volunteers found some plants and trees were disappearing.

The team realised that just planting and nurturing was not enough; there was a need for documenting them. So they set out to create a repository of authenticated data which is educative and informative and can be used to bring awareness and sensitivity to the environment. Each tree was thus tagged with a number and photographed with GIS coordinates along with the taxonomy of the tree. 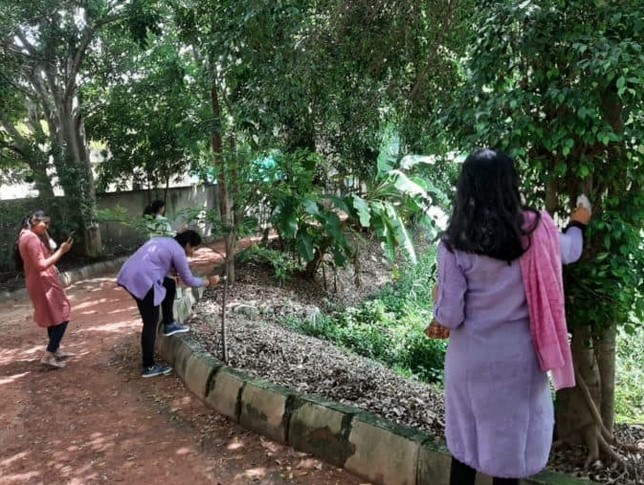 Kavitha Kishore served as the project director focusing on the sustainability of ecosystems in urban spaces. 25 Students of Jyothi Nivas college actively participated in the numbering of trees and GIS tag. They were mentored by Dr Priyadarshini, Head of the Department of Botany, Jyothi Nivas College and Dr Jagadeesh, Joint Director Lalbagh horticulture and team.

The team divided the lake into four quadrants – North, South, East, West and Island region. Then they started checking each tree with a minimum height of 2.5 metres. The identified trees were tagged with GIS information such as: 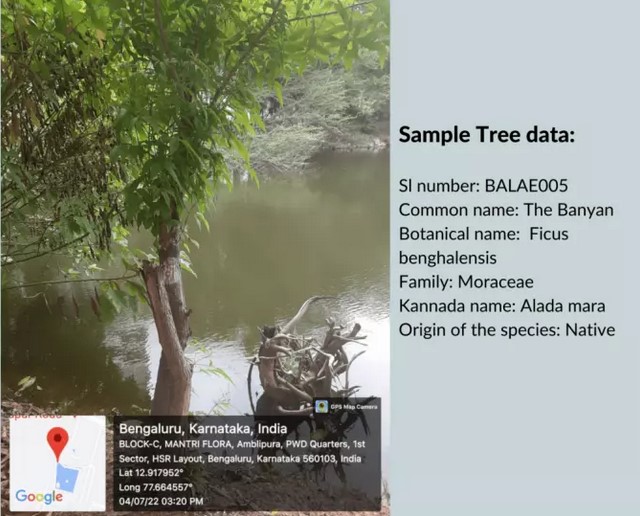 1200 trees were identified and classified as Native, Exotic or Dormant (Dead trees that are equally beneficial in providing the much-needed habitat for flora and fauna in an ecosystem). They found a high number of native trees, and in all, around 75 different tree species. The trees were equally distributed among all geographical quadrants 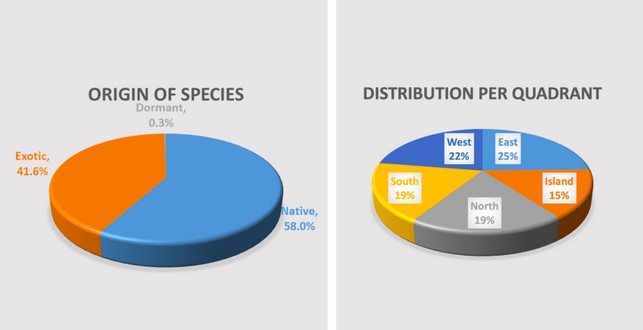 Types of trees and their distribution along the Lower Ambalipura Lake. Pic: Kavitha N Kishore

They also did a water quality analysis and found no sewage or toxic content. The entire report can be found here. 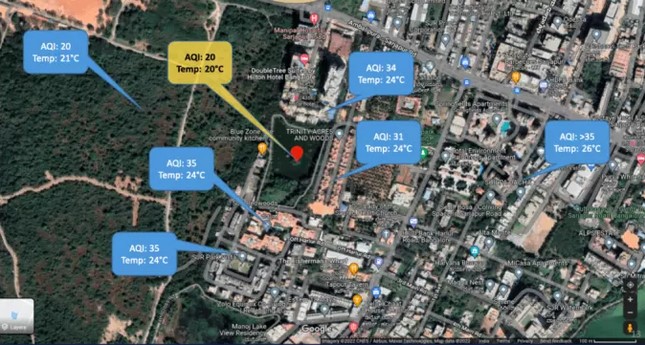 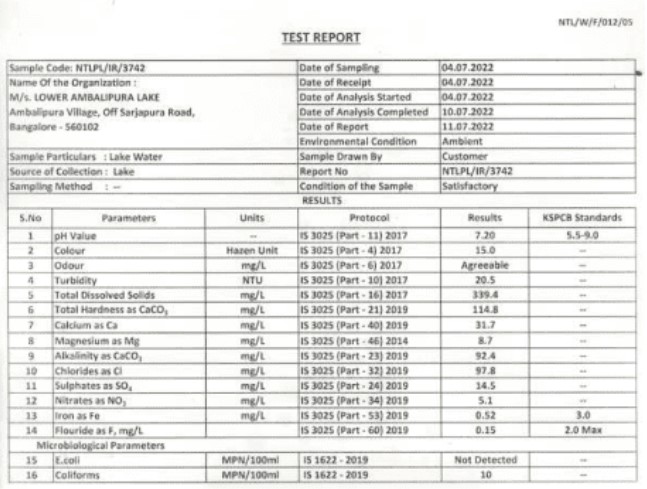 The audit helped find that the soil quality was good, with all values within the ideal range – the soil was rich in humus thanks to the regular mulching. Soil analysis was done with the help of The Department of Horticulture, Biocentre Hulimavu, Bannerghatta, Bengaluru 560076. No pesticide or toxic content was observed and no plastic content was found. The entire report can be found here. 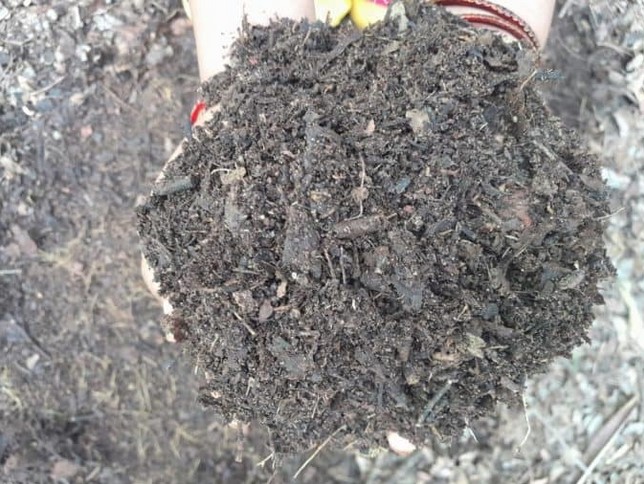 The team found rich biodiversity supporting a well-balanced ecosystem. A wide variety of flora and fauna were documented in the area – over 40 bird species were spotted there.

The economic value of trees

Whilst the environmental and biodiversity benefits of a tree are well-known, a Supreme court-appointed committee has pegged the monetary value of trees, based on the value of oxygen they release and other environmental benefits:

A green lung space for residents

The residents of the neighbourhood benefit from cool, open space, making use of the walking/jogging pathway for regular exercise for themselves and their pets, as well as leisure activities of birdwatching and photography. The numerous birds, plants, trees, flowers and butterflies help rejuvenate the mind and body.

The volunteers have shown that anyone with pride and passion for conserving lung space can make this happen. All it takes is a committed group of individuals working together along with authorities and becoming the eyes and ears of the lake. Such a group can ensure regular maintenance of the lake, planting as many trees as possible around the lake, and monitoring the water quality – keeping it clear of sewage or toxic waste. They need to ensure all rules and regulations are adhered to and highlight any threats to the lake for prompt action.